What’s on in East Midlands?

The East Midlands is the place to go if you want to see areas of outstanding natural beauty and a region steeped in art, history, and culture. See one of Britain’s architectural jewels, Lincoln Cathedral, the battlefields and tomb of Richard III in Leicestershire. The region also has some of the UK’s most diverse urban spaces - with Leicester, Lincoln and Nottingham all offering a myriad of cultural activities as well as thriving nightlife and social scenes. Of course, there’s also the traditional seaside resort of Skegness for those visiting in the summer months.

Where to stay in East Midlands

East Midlands covers quite a large area, so where you choose to stay will depend on the priorities of your trip. If you are planning a business trip, then you will most likely be seeking corporate housing in Leicester, Lincoln or Nottingham, whilst those who prefer quiet surroundings might look for somewhere more rural. Wherever you choose to base yourself, those making an extended stay should consider serviced apartments for their accommodation needs, as these provide all the benefits of a hotel, such as room cleaning and reception, whilst giving guests their own personal space, with secure access and enhanced kitchen facilities.

What to do in East Midlands

The East Midlands is a diverse region of the UK that offers just about every kind of passtime, cultural attraction and social engagement imaginable - from the scenic countryside of Bradgate park, to the vibrant nightlife and shopping of Nottingham. Whilst each county in the region has its own distinct character, each will offer a balance of rural and urban attractions.

The major cities of the area, Leicester, Lincoln and Nottingham, offer a plethora of historic landmarks and heritage sites - from grand cathedrals to stately Tudor homes. Many are open to the public and offer a fantastic opportunity to explore the history of regional England. Many of the surrounding rural areas also feature numerous National Trust sites and scenic countryside landscapes.

Of course there is more to the area than history - Nottingham is famous for its shopping, nightlife and selection of contemporary cultural highlights, whilst both Lincoln and Leicester offer some of the UK’s best traditional pubs - many of which serve local produce, for a real experience of the East Midlands.

Tips for staying in East Midlands

The county has several high end restaurants, including Sessions Restaurant and Reform Restaurant in Lincoln, or North Bar and Kitchen and the White Peacock in Leicester. Away from the larger towns, Markham Moor Inn is a stunning 17th-century venue offering fine-dining as well as a casual pub. Similarly, the Plough Inn is a 16th century spot, offering a range of traditional British cuisine.

There are several large shopping malls across the East Midlands, Waterside and St Marks Shopping Centre in Lincoln provide numerous retailers, ranging from high street fashion to consumer electronics, whilst Highcross in Leicester not only features over 100 stores, but also a multi-screen cinema and numerous places to eat and drink. There’s also the East Midlands Designer Outlet, for those looking for a bargain.

Lincold Catherdral is a stunning 11th century structure that is as fascinating inside as it is outside. The city also has Lincold Castle - a ruined Norman fortress with exhibits and free guided tours. Of course Nottingham also has its eponymous castle, which is an imposing mansion offering tours to the public. There is also the famous City of Caves attraction, which sees visitors descend below the streets of Nottingham and explore how residents have used the natural cave system over the years.

The East Midlands, like anywhere else in the UK, features  extensive public transport networks comprised of buses, trains and trams. Overground railway services connect the major towns of Lincoln, Leicester and Nottingham, as well as offering fast services into London up to 6 times per hour. Buses are usually the best option for travelling between the smaller, more rural locations, and there are also coach services that run to other UK cities in the north and south.

The area has a diverse economy, with global organisations representing a range of sectors. Retail is particularly prevalent, with Sports Direct, Wilko, and Boots both having HQs in Nottinghamshire. Lincolnshire meanwhile is home to several construction and development firms, including Barrett Homes and Aggregate Industries. There are also numerous financial service providers that specialise in local business. 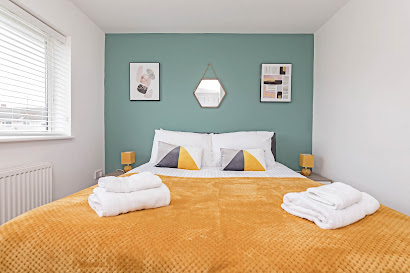 Things to know before booking serviced apartments in East midlands