What’s on in Albion

Albion has undergone something of a cultural renaissance in recent years and is now widely considered as one of Melbourne’s up-and-coming areas, with numerous businesses, cafes and restaurants popping up across the district to support its expanding population. The neighbourhood also has a burgeoning arts scene, with local talent exhibited in pop-up galleries and converted warehouses, as well as plenty of live music venues. A great mix of commercial and residential properties, Albion is an exciting place to be as well as a convenient gateway to the wider Melbourne city.

Where to stay in Albion

Melbourne is full of fantastic places to stay and Albion is no exception. From luxury hotels to backpacker hostels, the district has it all. Whatsmore, if you are planning to make an extended stay in the area, perhaps on a business trip, there’s also a fantastic array of serviced apartments on offer. The Squa.re present a selection of such properties, ranging from self-contained studios to large scale corporate housing. Each has been chosen according to its range of features, including room cleaning, secure access and on-site kitchen facilities.

What to do in Albion

Albion has become one of Melbourne’s trendiest areas, with an eclectic population comprised of artists, tourists and city workers. The neighbourhood’s dynamic atmosphere attracts people from all over the city, whether to enjoy lunch at one of the plethora of hipster cafes or enjoy an evening out in one of the many nightspots.

The area is also great for those looking to be more active, as there are numerous sports facilities in the immediate vicinity, as well as bowling, go-karting and more. Kororoit Creek near Selwyn Park is also a popular place for those who enjoy nature, with its picturesque watercourse and green spaces.

Albion is also the perfect location from which to explore the wider Melbourne area. Both the city centre itself and the surrounding districts offer a surprising amount of attractions and things to see and do - from extreme sports to world-class cultural facilities. It’s also ideal for those who might wish to head out of the urban area to explore the surrounding countryside.

Tips for staying in Albion

Albion more than lives up to Melbourne’s reputation for offering world class cuisine, with the Hotel Albion, White Mojo Plus and Cirelli & Co all offering fine dining experiences with superbly diverse menus. For something more laid back, there’s plenty of grill places, such as Neruda's Brunswick or Blazed Bar & Grill - both of which are hugely popular with locals and tourists alike.

Albion itself is not a big retail district, with the Clarendon Centre being the main place to go if you are looking to pick up some basic items. However, the areas proximity to Downtown Melbourne means anyone staying there has easy access to the best shopping in Victoria, with Bourke Street Mall and Elizabeth Street being within walking distance.

Albion’s attractions lie within its cultural scene, with popular hangouts such as the Albion Rooftop providing a great way to soak up the ambience. Many visitors also enjoy a trip to the waterfront which, despite its industrial heritage, offers amusements and entertainment at Spirit Station Pier and Princes Pier. There’s also Port Melbourne beach just a short walk southwards.

Melbourne has a comprehensive public transport network and being a central district, Abbotsford benefits from this. The area is served by several rail and tram stations, making it a great place from which to access the wider urban area. Buses also run frequently, both locally and to other neighbourhoods, offering a cheap and convenient way of getting around - both in the city centre and toward the surrounding suburbs.

Melbourne is a powerful economic centre and the business hub of Western Australia. It has a diverse economy supported by several sectors. Financial services are big business in the area, with ANZ international banking and financial services group operating being based in the city, whilst manufacturing is also a major source of employment, with large domestic firms such as Amcor and BlueScope operating locally. The country’s largest telecommunications groups - Telstra - also has offices in Melbourne. 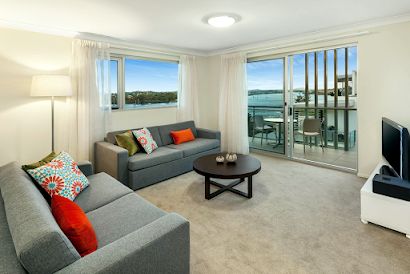 Things to know before booking serviced apartments in Albion